(Writing about a dystopian novel seems apt this week – the week in which we are as far in the future from the year 1984 as the year 1984 was when the novel 1984 was first published.)

Earlier this month I wrote a short story based on the idea of inter-generational conflict in the near future. The young (not entirely unreasonably) blaming the old for Brexit, climate change and rising taxes and enforced longer working lives to pay for spiralling social care and pension costs. In amidst the growing division and sporadic outbreaks of violence, a group of ageing young-at-hearts take refuge in nostalgia for the music and style of their younger days.

The day after I finished it, I turned on a Radio 4 panel discussion and heard John Lanchester, an author of four previous novels (one of which a friend gave me as a gift not long ago), and three works of non-fiction (including the intriguing sounding Whoops!; Why everyone owes everyone and no one can pay, about the global financial crisis), and is a contributing editor to The London Review of Books. He was talking about his new novel The Wall (Faber & Faber), published last week. 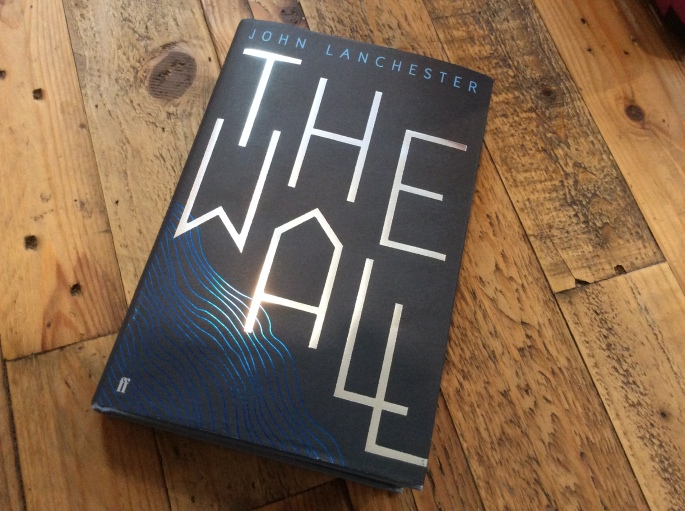 On one level, The Wall is a dystopian novel. Set in some indeterminate but not-too-distant future, climate change – The Change – as opposed to the normal dystopian device of nuclear apocalypse, has eradicated the beaches and coastlines of Britain and the world. Refugees risk everything to flee the drought and famine stricken super-heated South. The answer – hello Donald – is to build a wall around Britain, to keep the rising tides and desperate refugees, The Others, at bay.

The Wall is guarded by The Defenders, young people serving two years mandatory national service. They all despise their parents’ generation, and family life seems to have broken down. In the face of a falling birth rate and the need to produce the next generation of Defenders, those young people who actually want to bring kids into the world are designated Breeders and bribed with certain privileges.

The protagonist is Kavanagh. He doesn’t know what he wants to do with his life but for the next two years his life isn’t his own anyway. It belongs to The Defenders and The Wall, and the task of keeping out The Others.

A lot of the first section of the book is taken up with two things – cold and boredom. “It’s cold on The Wall” is the opening and closing sentence of the novel. One of Lanchester’s great skills in this new work is to bring poetry to his in-depth study of the various types of cold, damp and darkness Kavanagh and his fellow Defenders have to endure on their 12-hour postings as sentries and look-outs on The Wall. Lanchester seemingly has as many ways of bringing that cold to life here as Eskimos reputedly have words for snow. Another great skill is to write about mind-numbing boredom and routine without being boring.

So, yes on one level The Wall is a contemporary dystopian fantasy. But the key themes – climate change, refugee crisis, intolerance, closing borders to outsiders – are the stuff of our every day headlines and rows on Twitter. This is not a galaxy far far away; this is, allegorically, the future just around the corner.

As Philip Pulman sums up on the back-cover blurb, The Wall is both part dystopian future warning and part (poetically written) allegory for the realities of today. Definitely my top January read.